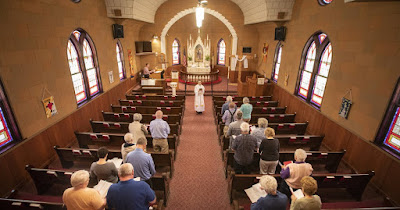 If your church disappeared tomorrow, would anybody in your community know or even care?
Christmas (outside of an occasional wedding or funeral) is one of two times of the year that some people will actually visit a local church, including yours. They come, perhaps, out of old traditions, maybe an invitation, or even guilt. However, Christmas, like Easter, will come and go, and they will be gone too.


The reality is we live in a different world than we did a generation ago. The societal norm of families going to church on a Sunday has been replaced for many by Sporting events, DIY home projects, and shopping.
As a result, between 6,000 and 10,000 churches in the U.S. are dying each year. That means around 100-200 churches will CLOSE by the end of next week. Sadly, Church Leaders and congregations find it easy to blame the secular culture, national politics, and the media for this erosion, but frankly, I don't buy it. If only outside forces (and the modern culture) were the actual reasons behind declining and non-influential churches, we would likely have no churches left today.
A quick study of church history proves that the greatest periods of church growth, particularly in the first century, took place in adversarial cultures that despised the faith. People literally had to put their life on the line for their faith. That is not the case in the United States today. We are (still) free to worship, and we are free to stay home, go to Wal-Mart, go to the movies, or play golf.
One of the responses to this decline has been to establish churches with a more contemporary flavor. These churches, with their casual attitude, praise band and powerful multimedia do grow. However, they tend to grow by moving people laterally from other churches, not from the abundant demographic of the "un-churched" among us. Instead, it becomes a church model that tends to become somewhat celebrity centered and (most dangerously) more individually self-centered. If people aren't made to "feel good" about themselves or are not entertained, they too either change to a different church or simply drop out. Commitment is fleeting.
This may come as a surprise to some, but many of these "new" churches are actually mission starts of long-established but declining denominations. They just never mention the denomination's name. In one case, the South Baptist, each week they establish new churches, but their overall membership continues to drop. In the last few years, by about 10%.
While we try to blame the world around us, the truth is we are not hindered by external forces; we are hindered by our own lack of commitment, selflessness, and urgency. The things of God have become secondary. For some those that remain, they enter into a "survival mode" existence. Every year the cost of the facility drains the declining congregation's ability to keep pace. This "inward" focus destroys their outreach efforts, assuming they ever had one. They show up every Sunday wondering where everybody went (they got old, moved or died), but they keep doing the same things over and over again, and like the old saying about insanity, expecting different results.
Over the next several weeks I will be sharing some thoughts about being the church, and what it really takes to make a difference. Even in this day and age, there are a number of churches that are succeeding. Stay tuned....

+Robert (Bob) Biermann Show Host and
Presiding Bishop, Province of the Holy Spirit-Anglican Rite
Posted by Unknown at 9:07 AM